My work experience at stickee 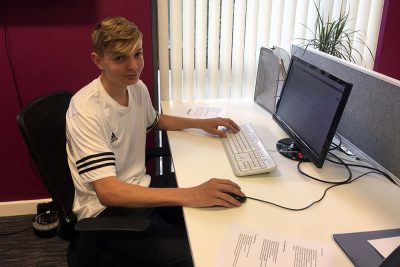 My name is Luke, I am 15 years old, in Year 10. I attend Langley Secondary School and I have spent the last week at stickee doing work experience.

Originally I was not going to do my work experience week at stickee, but after my dad did some work here he told me I would enjoy it, so he got in to contact with Damian (stickee’s Comparison Director). Although I was excited to start my week, I was also nervous. I was going into this completely blind, without knowing anyone here. However, as soon as I arrived, everyone was friendly and welcoming, so by day two I went in without any worries.

When I first entered the office, I was surprised to find that I had my own desktop setup for me! I was then told that for the first two days I would be doing comparison on stickee’s part of the MoneySuperMarket website, with Broadband and Mobiles. After Damian emailed me a spreadsheet with the work I needed to achieve, I remember him saying “Don’t worry if this takes you all day.” At first, I was working at a slow pace, but once I got the hang of it I finished very quickly!

This work was enjoyable for me as I felt like I was actually contributing to stickee: I found a broken link with a mobile site!

I carried on with that work on day two, but this time with Pet Insurance. I was really looking forward to day three as I was working in Research & Development. In the morning, until lunch, I was tasked with designing some progress arrows for the wall in Photoshop. Unfortunately, this wasn’t my forte, although I did give it a good go! After lunch time, Karl (the Director of Innovation) asked me to come up with ideas for a new sports game which was for the VR headset. He gave me some general ideas, and I came up with two games. The first idea I had, I was quite proud of, but Karl gave me some suggestions on how to improve it, so I changed my thinking and came up with a new idea, which could actually work as a VR game!

On day four, I was tasked with taking photos for social media, such as stickee’s instagram page, writing up an article about the Charity cycle event which was taking place in the office, and I also made a start on this document. I enjoyed doing this as I have always been fond of writing. On my last day Karl tasked me with drawing out various stages of the game I had brainstormed and wrote about on Wednesday. This was fun as it let me flesh out the ideas inside my head. After this he gave me a quick briefing on (the voice activated assistant/speaker) and he showed me some basic commands. He then asked me to try and come up with some new commands, which is easier said than done. I think in the end I only managed about 3 new ideas!

After my week, I have learnt valuable skills about comparison and I also now have a much greater knowledge and understanding about how small businesses like stickee work, and it has really given me a better idea about what I would like to do in the future, and what career path I would like to go down.

Thank you stickee, for giving me a fun week where I have learnt invaluable knowledge about work and the workplace, and how businesses like your own operate.