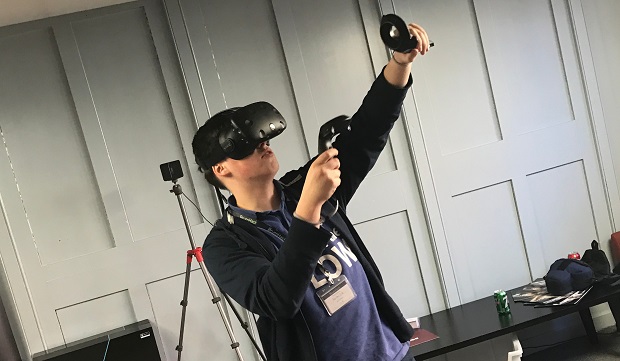 There is much talk about the benefits of AR (augmented reality) over VR (virtual reality) and how the experts among us expect AR to eclipse VR in society in the non-too-distant future. This may well be true, and I can certainly see the obvious applications for AR in every day life, but that does not mean that VR will become the worlds quickest obsolete format. It’s not really comparing apples with apples, as the saying goes. And this is why…

So firstly, I am a self confessed technophile, no doubts about it. But like many people I have a love/hate relationship with technology. Yes, I consider myself a first adopter of many new tech toys, paying over the odds for something that may well be redundant in twelve months time. But the exploration of what is possible is what makes it all exciting. I happily bought the HTC Vive, Oculus Rift, Samsung Galaxy Gear, Amazon Alexa, Raspberry Pies, Particle Photons, iPads, iPhones, Apple TV, Chromecast and much much more in the very first days of their release. Just to see what they could do. Some impressed more than others but each one edged technology in our day to day lives forward, some of them even made greater leaps.

I would consider Augmented Reality applications much more akin to the smart phone with regards to how it has found its way in our every day lives. The smart phone and tablet – a wonder of technological advancement that puts so many functions into the palm of our hand, but as a result takes them away from everywhere else. In the olden days (I’m not that old, honest) I could go to a computer and check my email, or read the mail that a good old fashioned postie pushed through my door. Then I might take a trip to a library (remember them? They were musty buildings that parents used as stop off points for their children to go to the toilet on the way home and that successive governments took such a dislike to they closed them wherever possible), I might read a paper book in an arm chair, go and knock on a friend’s door to see if they wanted to come out and play football, write in a diary or wall calendar, use a map as a means to argue with a loved one lost in the woods, skim a flyer for a takeaway portion of salmonella, paint a picture on an easel and so on an so forth. Now I just sit in a chair staring at my tablet. I’ve condensed tens of different tasks into one location, and now I get told I’m spending too much time on my iPad. Well, yes, I think I probably am, but I’m still doing all those things I used to do but now just in one place. Damn you technology, you’re making my eyes hurt.

What has this got to do with AR? Well AR could provide the next step in this evolution. No longer would be the need to stare at a tablet screen, I could do all those things directly in my field of vision, and no one would have the faintest clue what I was doing. How on earth will that affect human relationships It’s already frustrating if you’re dining out with a love one, a friend or colleague and they sit there, distracted on their mobile phone. But at least you can see that they are not listening to you, no matter how annoying it is. Imagine telling the greatest of jokes, such as the one about the purple perforated ping pong ball and your friend laughs at the punch line (when it arrives). Result! You think to yourself. I’ve still got it! But no, they weren’t laughing at you, all the time they’d been watching a cat video that had popped up in their line of sight, sent to them five minutes ago by Dorian from the Maintenance department. The cats have won.

On the flip side AR could help us detach from screens. I’m walking in the countryside and I see a tree that puzzles me. I don’t have to pull out my smart phone, google the shape of the leaves and try to get a match. I simple wake my AR glasses with a voice controlled wake word and ask the voice in my head what tree that is. A little flag pops up pointing to the tree with ‘No 3. The Larch’ on it. Ah… so that’s what a Larch looks like. At the same time I’m bitten by a snake, typical! My AR glasses, using image recognition, tell me it’s a Death Adder. Here in Worcestershire? Well fancy that. I’ve got six hours to live. Blast. Thankfully I’ve got a subscription to Bupa Super Prime (a partnership between Bupa and Amazon that can deliver me an anti-venom in 8 minutes via an Uber driver). A quick chat with my AR glasses and the anti-venom is dispatched, fulfilled by Amazon. Actually, since they’re on the way anyway I add a portion of Nachos to the order.

I imagine there may be even more helpful uses than this. Integration with these kinds of technologies with the real world could help us reclaim reality from our smart phones so should not be feared, but we will need to learn how to use technology better so we don’t fall headlong into a virtual world, cut off from reality.

So Virtual Reality then? Where is its place in this mixed reality world? VR provides escapist detachment from reality. So not to be used 24/7 in every day lives, but it offers something that AR does not – a complete immersion into another world, an ability to separate one’s self from the noise around you. Much in the same way as a playing a game of football, squash, singing in a choir or doing a crossword a VR activity could focus your attention absolutely on one thing, giving you relief from the noise around you. No emails, no multi-tasking, no cat videos from Dorian while asking for you to send a quote on a package of dockets before midnight. VR currently gets talked about as a gaming tool, immersing the player even further into a game, away from reality. This is true, it is quite compelling. But it does have much wider applications in training, therapy, education and business where a single point of focus to achieve a set goal may be required. I see VR as the perfect escapist isolation where you can focus your concentration on a single thing, where as AR brings everything else to your life with immediacy. Multitasking noise compared to a single point of attention.

But its none of us will know for certain where these technologies will lead us. I wonder if Nokia, when releasing the 1011 in 1992 expected mobile phones to be voice controlled and dimming my living room lights to a cool shade of Arctic Aurora while ordering my take away sushi? You’ll have to ask them.